All individual tickets are being sold over the phone by calling 753-4531 ext 200 or emailing boxoffice@lspuhall.ca. 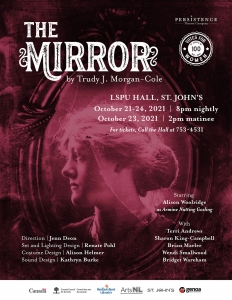 Armine Nutting Gosling was a pioneering reformer and feminist who led the fight for women in Newfoundland to gain the right to vote. Among her many other causes she campaigned for better conditions for women and children living in poverty, and fought against cruelty to animals. She also had six children of whom she lost two in infancy, supported her husband’s career as Mayor of St. John’s, and struggled with self-doubt and depression. The Mirror, a new play by award-winning writer Trudy Morgan-Cole, takes the audience not only into Armine’s story but into her heart, as she measures her own accomplishments against those of her brilliant sister Adelaide and wonders if any woman’s work can ever be enough to truly change the world.