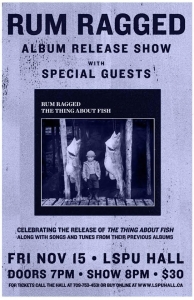 On Friday, November 15th 2019, Rum Ragged will be celebrating the release of their 4th studio album “The Thing About Fish” with us at the LSPU Hall. This will be the first ever album release show for the four-time MusicNL winners and two-time ECMA nominees. In just five years Rum Rugged have quickly become known as some of the finest purveyors of traditional music in the industry today. Their extensive touring schedule has taking them away from their homes time and time again to play the music of NL around the world; however, with the release of The Thing About Fish they return to St. John’s, NL to bring their most anticipated and elaborate show to date to the legendary LSPU Hall.

Rum Ragged’s Mark Manning and Aaron Collis will bring together some of Atlantic Canada’s most heralded musicians for a night of song, instrumental tunes, stories and recitations as well as some exciting surprises that is bound to make for one of the most memorable nights of 2019 for Newfoundland and Labrador Folk music. The band will be playing music from their latest release “The Thing About Fish”, an album that in just five days shot to #1 of Fred’s Records Top 30 wall. With their new material and their new sound, Rum Ragged has once again put forth an extraordinary piece of work. Having collected never before recorded songs and tunes from their outport homes, Manning and Collis have created an album of music that continues the work of the singers and players of the past who have inspired them so, all while bringing the music of the past to the listeners of today. Come join Rum Ragged at The Hall on Friday, November 15 for a night that will not soon be forgotten.